The Emergence and Submergence of Authenticity: exploring Winnicott’s concepts of the True Self/False Self and Transitional Processes.

“I attended the Squiggle conference on 24 November 2018 titled ‘The emergence and submergence of authenticity’. The conference was focussed on exploring Winnicott’s ideas of True Self/False Self, Transitional Processes & the Facilitating Environment. The event was held on a Saturday morning at Newcastle Arts Centre. The venue added to the intrigue to the topic of discussion and the presentation.

Adrian Sutton described Winnicott’s formulation of “True and False Self” as a spectrum ranging from polite societal norms to the extreme pathological end. He explained the theory of the “Maturational Processes” and quoted from his book   Psychiatry, Paediatrics and Psychoanalysis: through countertransference to case management (2013). He linked the origin of medically unexplained symptoms to neurological development. I read his book after the talk. I felt that one his views was reflected in the chapters of his book – calling a task a duty may rob us of our natural wish to do the task. In his talk he highlighted the altruism of our patients.

Adrian explored the complex concept of true and false self, using case vignettes. His vivid case descriptions both in his talk and in his book have stayed with me. He also cited Dickens’ Oliver Twist’s want for some more and the idea of Father Christmas as an illusion of a parental figure that gives without demand of gratefulness. He made us reflect on the difference between “gap ” and “space”.

The illustrations in the book include drawings by children with psychosomatic presentations. Adrian used the “Johari window” to explain our thinking behind our feelings of unsafety. The drawings in the book reminds us of the question he posed to the group: “How do you learn to feel unsafe safely?” I strongly recommend the book especially to doctors in psychiatry and paediatrics although the book can be read by anyone.

Most importantly I felt that the talk was positive and encouraged the tolerance of uncertainty. Adrian’s talk inspired me to view ‘trial and error’ as ‘trial and improvement’. It has encouraged me to try and learn the ‘art of not knowing’ and to aim to specialise in it”.

The Emergence and Submergence of Authenticity

With Adrian Sutton and Tessa Dalley

The Squiggle day on the emergence and submergence of authenticity was a case study in intrigue and excellence from the minute it began. The day was split into two distinct parts, the first consisted of Prof Adrian Sutton’s discussion of the True and False Self using a number of case studies for reference. This proved to be a thought provoking few hours both academically and professionally as it seamlessly blended together theory and practice.

As a Lecturer in Organizational Health and Wellbeing I am often in lectures or giving lectures, but I rarely get the opportunity to hear from somebody with such vast clinical and academic experience. Even more rarely do I get the chance to be encouraged to think through such interesting ideas. Adrian began his talk with a discussion of the embodied nature of the True Self arising out of bodily tissues and functions. He described the process by which the baby moves from vegetative excitation, through to the emergence of the True Self in great detail, emphasising the importance of this movement towards health, and the possible lack of recognition for the True Self as a ‘fate worse than death’. Now, I have read about the True Self many times, but I never understood it in such depth as I was able to after Adrian’s talk. His vast clinical experience really brought the concepts to life in ways which are often difficult for academics to achieve.

Of particular note was Adrian’s use of excerpts from his excellent book entitled ‘Paediatrics, Psychiatry and Psychoanalysis: Through Counter-transference to case management’, to illustrate his discussion drawing on a fascinating case study concerning a girl call Vanessa. Vanessa had experienced a number of physical symptoms with no clear explanation over a period of years. With the help of Adrian Sutton Vanessa seemed to place much of this on the shoulders of a character that they called together ‘Bert’, who on one occasion resided in the girl’s big toe. I do not wish to go into the story in any depth here, as this is a story for Adrian and Vanessa to tell, and in any case, it is wonderfully drawn in Adrian’s book. For my purposes here though I would just like to say that this case thoroughly drew me in, as I am sure it did many others in the room. It illustrated to me the relevance of the True Self in more vivid colour than I had previously been capable of.

Adrian’s presentation was no ordinary lecture, he was able to hold a room of people, from many different backgrounds, and bring them together. For those of you with clinical experience, hearing and thinking through case studies is probably much more common, although I am reliably assured that Adrian’s illustrations proved to be of much interest to the art therapists and students in the room as well. For academics and scholars interested in bringing these ideas into other fields however, this was fascinating. The thick descriptions gave new life to the ideas, allowing many more nuances to surface. The contributions of Tess Dalley were also brilliant, allowing the audience a unique vantage point on some of the debates ongoing within the psychoanalytic community and the different possible interpretations of ideas and events.

I learnt a lot, I have a lot more to learn, I will definitely be listening to Adrian again!

As a trainee art therapist at the University of Chester I was excited to hear about a course that was affordable and relatively local (being based in rural Mid-Wales, my definition of local is a broad one.) Added to that, it promised an intriguing mixture of the theoretical and practical: the morning session was delivered by a known and much-respected guest lecturer on our MA programme, Adrian Sutton; and the practical afternoon session by a well-known name from the reading list for all students of art therapy: Tessa Dalley, who also chaired the morning session.

Arriving a few minutes late having taken a wrong turn entering Manchester, I took a seat near the back of the crowded room. Frustrated at missing the opening slides, I was soon soothed by Adrian’s short flowing river video, familiar from a talk he presented at the University. It’s a powerful metaphor for therapy, including the invisible unconscious processes; currents that may be active under the surface, operating against the flow of the river and the need to take, at times, the long view from the bank.

Having previously heard Adrian lecture on object relations, it was interesting to hear him speak from a Winnicottian perspective. His talk included explorations of the False Self /True Self and the Transitional Object, set within the context of maturational processes, and enriched by vivid case study examples.

Lunchtime was an opportunity to discuss the morning with friends, and, as the non-art therapists left, to marvel at the sheer number of art therapists gathered in one room. Art therapists had felt a bit like a rare breed to me; the number I’d previously met would probably barely make it to double figures. It was encouraging to think that this could indicate a more widespread profession than I’d imagined. There was diversity of age, but less so of gender and ethnicity: if this is an accurate snapshot, we are predominantly female and white. Musing further, I wondered how many of us were students? The optimism engendered by the thought of all of these gainfully employed art therapists receded a little, as I pondered the likelihood of us all finding future employment.

In the afternoon session we split into small groups around tables. We were asked by Tessa Dalley to recall a clinical experience that resonated with one or more of the Winnicottian themes from the morning session. Having not yet started practicing as an art therapist, or embarked on placement, I struggled initially to begin. Eventually I drew on a recent experience involving an adult rather than a child, at a mental health charity drop-in where I work with a group in an art-teaching capacity: mid-session I had realised a student was missing, and on taking a walk around the adjoining room, discovered her large frame curled up behind a table. Without moving or looking at me she spoke about her feelings of not belonging, and of a felt rejection by the rest of the group. I sat with her for a while, providing a non-judgmental ‘holding space.’ My role felt much like Winnicott’s ‘good enough’ mother. This drawing is one of two I made at the workshop. In this one, I wanted to explore what seemed to be the student’s ambivalence: wanting to hide, and wanting to be found. The subject is depicted in a child-like posture. Looking again at the image again now, I am reminded of children’s games of hide and seek, and the way in which a young child will attempt to hide by covering their eyes. 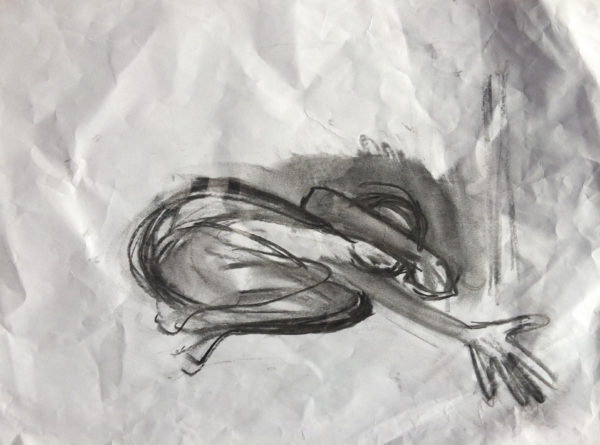 After the time allocated for art making ended, and the period for discussion within the small group began. It was interesting to hear about the variety of settings and experiences shared, and the group felt engaged and supportive in receiving others’ artworks and reflection on experiences behind the artworks; so much so that we still had two people’s images to hear about when time was called. An extension was asked for and given, and when time was called again, one person had still not shared their image. In what could be an illustration of the compassionate ambiance of our group, another group member encouraged the person who had not had the opportunity to share their image to hurriedly do so whilst we all moved the seating around for the final session. I think our experience – our reluctance to stop – demonstrates the value of small group work within the larger conference; particularly when participants have been encouraged (as we were) to work with people not already known to them.

For the concluding part of the afternoon session, all 60 participants sat in a single circle, almost spanning the length and width of the large conference room. Having explored individual stories in the small group session, someone from each group fed back to the whole room, facilitated by Tessa; the breadth of experiences that emerged was fascinating. Despite it being such a large group there were some lively back-and-forth discussions around some of the clinical experiences shared in the feedback. This image (below) was made after the event, and has a sense of my experience of the ‘potential space’ created by the event and the participants during the day. 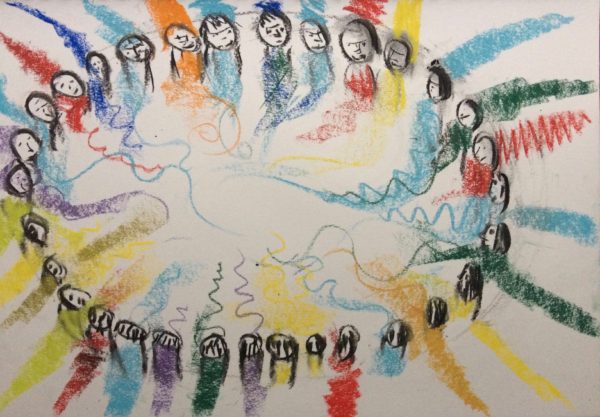 Whilst the morning session was enriching and educational, the opportunity to be amongst such a large group of art therapists, hearing individuals’ experiences, and gaining insight into the diversity of practice carried out by art therapists, was what made the event particularly enlivening for me.

It’s better to exist in prison than to become annihilated in meaningless compliance.

– Group influences and the maladjusted child