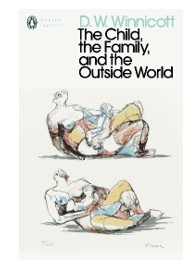 The Child, The Family, and the Outside World

Winnicott introduced several widely regarded theories into a modern understanding of childhood development and adult wellbeing: notably the role of the  ‘transitional object’, such as the comfort blanket or a teddy bear; the importance of the ‘holding environment’ in babyhood and throughout life; the importance of play throughout our lives as key to emotional and psychological well-being, and the ‘good enough’ parent – his theoretical emphasis on empathy and imagination which coloured his instinctual approach to parenting. In The Child, the Family and the Outside World Winnicott touches on a wide range of questions, from why babies cry and why toddlers are aggressive to how to teach children about sex. Above all, Winnicott encourages parents to ignore external pressures and guilt, and to trust their own instincts. His accessible and non-judgemental approach remains as radical today as it was in the 1960s. During the Second World War, Winnicott served as consultant paediatrician to the children’s evacuation programme and the BBC asked him to give over sixty talks on the radio between 1943 and 1966.

Listen to some of his broadcasts.

In my opinion jealousy is normal and healthy. Jealousy arises out of the fact that children love. If they have no capacity to love, then they don’t show jealousy.